Log kya kahenge, or “what will people say”, is a familiar refrain to many second-generation South Asians. While the diaspora children may know the phrase differently, it more broadly ties into collectivist culture that compounds the devastating effects of the “model minority” label.

The term “model minority” is used to refer to a minority group perceived to be richer, harder-working, and more educated than the national average, but to whom the term “model minority” applies to is exceptionally nebulous. The term is revoked for the perceived errors of certain racial subgroups, or exuberantly applied to demean the Black and Latinx communities. Thus, the label and its ambiguity is wielded by the powerful for their exclusive benefit.

A clear example of this phenomenon is the South Asian community’s lack of access to equitable healthcare. Log kya kahenge mentality and the model minority myth combine to set high cultural standards of performance and strong internal pressure to meet expectations. The projection of emotional resilience allows for a lack of governmental accountability.

Many South Asians never reach the point of actively seeking care, especially if it’s for a mental illness, because the appearance of “weakness” has been so heavily stigmatized. Meeting performance standards is so important that the repercussions of admitting to having a mental illness to family must be considered prior to seeking care. Dr. Jyothsna Bhat recollects hearing similar concerns in her psychotherapy practice in a blog post. Her South Asian clients would state that they couldn’t tell their parents about their mental health. They would also characterize their mental illness as a sign of weakness, believing that they “should be able to be okay”. This sort of denial and suppression of emotions, trauma, and pain are unfortunately commonplace. What will people say if I admit to having depression? How will our relatives react if it becomes obvious we’re seeking family therapy? Log kya kahenge and the model minority myth create extreme familial and societal pressure on South Asians to uphold the image of a stable, hard-working, and high-functioning person and family unit. Acknowledging illness is only counterproductive to that goal. 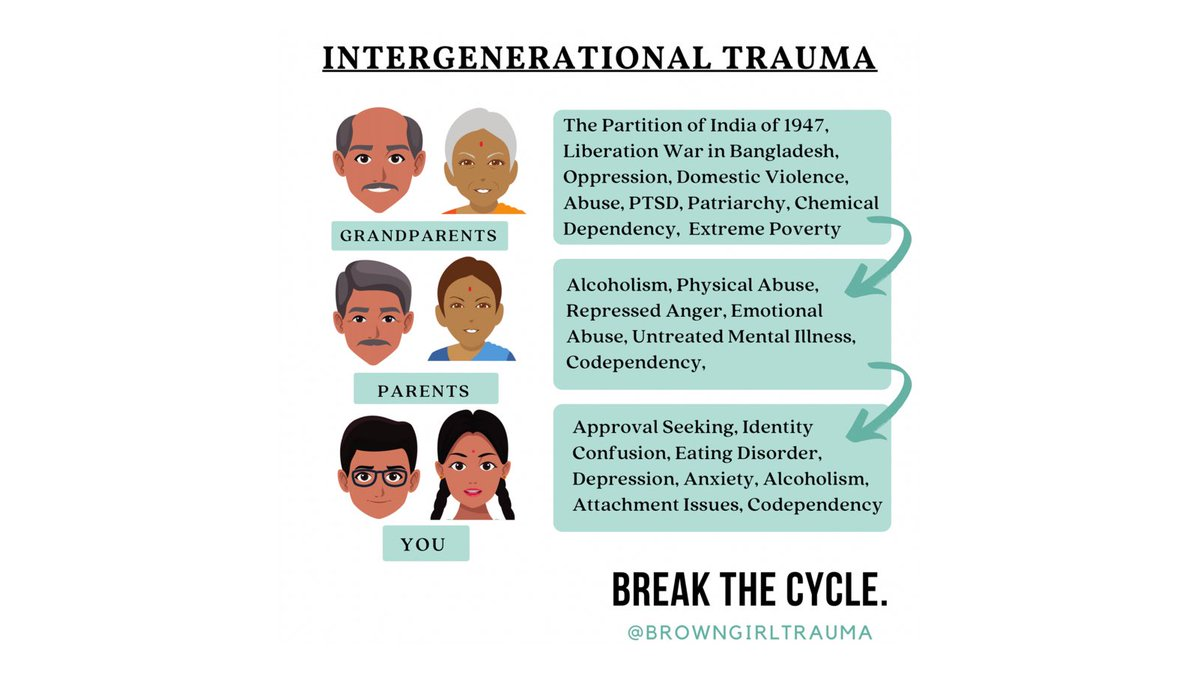 However, this lack of acknowledgment absolves the government from its responsibility to properly address the unique needs of the community.

Decades of systemic oppression both in their origin country and new home leave a mark on the diaspora’s biology. Brown Girl Trauma, founded by mental health professional Nisha Patel, has a useful infographic on how exactly this plays out across generations.

The concept of intergenerational trauma was first studied in Holocaust survivors and found the method of transmission to be primarily psychological. Parents externalized their post-traumatic symptoms through nonverbal and unconscious behavior such that their children suffered through secondary traumatization. Growing research has now shown that beyond the psychological basis, the transmission of trauma can occur biologically. In the case of infants of mothers exposed to childhood abuse, it presented as a more sensitive fight-or-flight response, a marker for vulnerability to anxiety.

As the concept of intergenerational trauma applies to the South Asian community, colonial events that primarily affected individuals born in the 1940s, such as the Partition of India, created a host of physical and mental issues that persist to this day. Given this, it’s not difficult to understand that the colonial legacy is carried on in every aspect of the South Asian diaspora’s lives; it’s written into our genetics, our parents’ behavior, and sadly our own. What began as a foreign power seeking natural resources from our countries continues on in our people as undiagnosed mental illness, risk-averse and authoritarian parenting styles, and dependency (on any multitude of outlets: drugs, alcohol, academic validation, romantic relationships).

While the solution seems to be simply encouragement of South Asians to seek healthcare, significant barriers exist in receiving such care. Besides the language barrier, South Asian patients may not experience or express illness like their White counterparts. Anxiety may be described as a stomachache, or a certain gesture may indicate lightheadedness. Supplying an interpreter or finding a provider of the same background is not always a solution in these cases. Many fear that their confidentiality won’t be respected by the interpreter, given the tight social networks that South Asians are a part of. Log kya kahenge acts as a barrier not only to seeking healthcare, but to receiving equitable healthcare.

Clearly, our current systems aren’t doing enough. The deconstruction of the model minority myth and of racism in the healthcare system are long-term goals fundamental to equitable access. If steps are not taken to this end, the South Asian community will continue to maintain the pretense of emotional resilience and repeat the cycle of generational trauma. If the United States wishes to take pride in its model minority, it must first actually treat (quite literally) South Asians as a valuable, complex people.